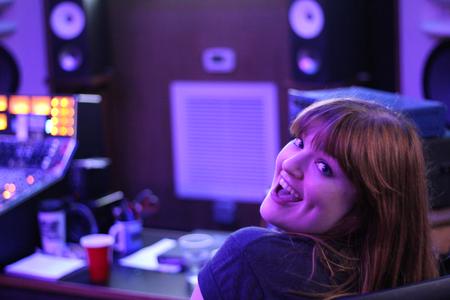 Madeline Laine, born in Chicago, Illinois, has always loved music. Being in a very theatrical family, Madeline grew up humming the Wizard of Oz before she could talk. Now, after attending Saint Gertrude High School in Richmond, Virginia, Madeline attended Berklee College of Music in Boston, Massachusetts. Madeline has been writing music since she was in elementary school, and with influences such as Sara Bareilles, Adele, Butch Walker, and Andrew McMahon, Madeline’s music typically falls into the Pop genre. After High School, Madeline tried taking the classical route, but while she attended the music department at the University of Dayton, she realized that commercial music was more of the way to go. Madeline is pursuing her dreams of getting her music out to the world, and influences young people that it is ok to be yourself. Other than playing Open Mic Night at the Tin Pan while home for the summer, Madeline loves singing show tunes, watching live theater, and playing shows in Boston with guitarist Mike Ho. With a background in Voice, as well as Ukulele and Piano, Madeline hopes to show you that she isn’t like the other cookie cutter pop artist.